Each weekday, from breakfast to drive time we will be celebrating Black Icons

and taking a look into what inspired their greatness.

Today we are celebrating Black Politicians/ activists and Educators of the Future!

First up, we’ve got model Munroe!

Munroe Bergdorf is an English model and activity. Munroe made a name for herself as the first transgender model in the UK for L’Oreal.
After advocating against racism on social media, she was dropped by L’oreal. Since, she has rejoined the company in 2020 as part of the diversity and inclusion board. She rejoined after calling out L’Oréal for claiming they support the Black community during the height of Black Lives Matter protests.

In 2018 Munroe won ‘Changemaker of the Year’ at the Cosmopolitan Awards. A year later, Munroe was awarded an honorary doctorate by the University of Brighton. She joined UN Women UK as an advocate in 2019, supporting its #DrawALine campaign, aiming to stop female genital mutilation. In a short span, Munroe has been a catalyst for change, advocating for equality and inclusion. We can’t wait to see what she’ll do next.

Students Alima, 18 and Natasha, 21, were credited for being behind the ‘Black Lives Matters’ protest that coloured the streets last summer. The two girls started chatting online during the US protests ignited by the murder of George Floyd at the hands of the police went viral online. Despite being at the height of the pandemic, the pair decided they could not sit down and do nothing. They posted tweets about their protest and, it skyrocketed! There were numerous demonstrations in London on the weekend of 29 May. 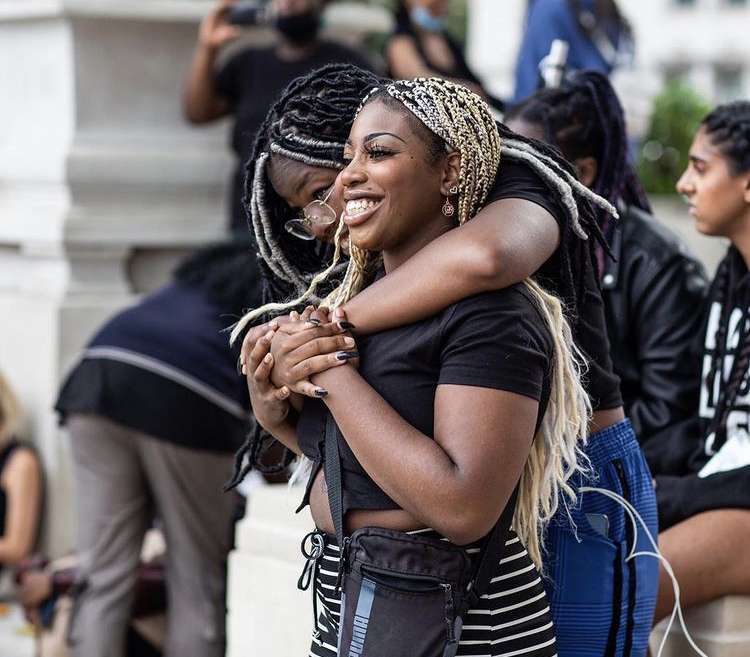 When Tyrek Morris, a journalism student, joined the girlS, the protest lit the streets across the UK. The house secretary, Priti Patel, said there were 200 anti-racism protests the weekend of June 8. According to a Guardian analysis, they found 260 towns and cities held black lives matter in June- July. Additionally, by mid-June, a total of 210,000 people attended protests in the country. These girls reinforce how important it is to stand up for what you believe; a simple tweet ignited a whole movement!

Tinuke & Clo are co-founders of the #fivexmore campaign. The campaign supports and advocates for black mothers and those expecting. According to the EMBRACE UK, 2020 report (a report that looks into maternal deaths), black women are four times more likely to die during childbirth or shortly after. Historically, this number was five times more (MBRRACE 2018 & 2019), hence where the name of our campaign started.

FivexMore aims to help combat this through empowering and informing black women to advocate for themselves through pregnancy and after childbirth. They have also appealed to the government for answers. Their government petition gained just under 200k signatures in June 2020. The following year, it was debated in parliament. In September 2021, during their awareness week, there was a second debate within parliament on Black Maternal Health. The organisation also featured on Rochelle Humes,’ The Black Maternity Scandal’ aired on channel 4 in 2021.

Let’s wrap up with Lavinya Stennett!

Lavinya Stennett is the founder of the black curriculum. The Black curriculum is a social enterprise that programmes for young people, schools and clubs to promote the importance of Black history. Since founding it in 2019, the 23-year-old has found success partnering with big companies like M&S and Macmillan. Additionally, they have worked within schools to educate children about black history in Britain, which is usually not discussed within the educational curriculum.

Lavinya’s inspiration can come from her own first-hand experience of the British education system. Noticing the exclusion of black pupils and black British history, she decided to do something about it.